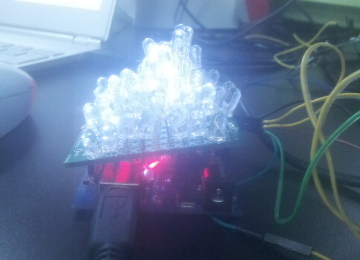 Back in December, members of Shenzhen’s hackerspace, Chaihuo, and the SZDIY community, visited Dim Sum Labs and awesomely came bearing gifts. We got 10 complete kits for the Color Changing Night Joule Thief and 10 for the WaveJT LED Chaser. They also left us with a few PCBs for the LoL Shield (http://jimmieprodgers.com/kits/lolshield/), an Arduino shield with 133 small individually addressable LEDs. LoL in this case stands for “Lots of LEDs”.

Unfortunately, when Tom was bored at the space and started making up a LoL Shield, one problem was immediately apparent. The Shenzhen guys hadn’t given us LEDs, only the PCBs. Worse, there were not 133 small LEDs at the space, only regular size. What do you do in such a situation? Hack it! Literally jam 133 regular sized LEDs into a board designed for the little ones.

Robust results were not achieved. As you can see in the picture, it’s a mess, with LEDs basically randomly popping out of the board. For reasons of epic fail, I soldered the middle row of LEDs in last and there was no space left at all. So I soldered that row instead to the reverse side of the board.

What with this being an Arduino shield, that was not the smartest thing to do as the shield would not now actually fit on top of the Arduino. The LEDs on the underside were blocked by the Atmel chip. We can plug in half of the shield to the Arduino, the rest has to be connected up with wires.

To add to my sorrow over this 2.5 hour Franken-monster of an abomination, in the end only about 75% of the LEDs worked, and debugging is just not worth it. LoL indeed.